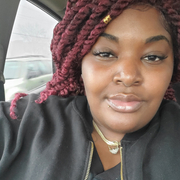 Last signed in: Within a month

I am a registered Medical Assistant I graduated in 2010 at that time my grandmother had a heart transplant, colon cancer and she was a chronic asthmatic I cared for her around the clock when I was not attending classes on the weekend. Months later my father had a stroke so I made the decision to move in with both my father and grandmother to care for them both in 1 home. I bath my grandmother whom also had very sensitive skin, washing her clothes clean the house when to the store for her as well. As far as my father my mother worked 16 hr shifts so I would help him move around the house, fill out paper work as well. In 2017 I had a member that attend my church who was seeking a home care aid, I became that aid for until death, I held that same duties for her as I did for my grandmother. I am currently a Center Supervisor for a plasma center in south county, We collect plasma from donors to create a medications for those who have blood diseases. working with the elderly has always been something I was willing to change careers for. I vowed to never place my family members in Nursing homes, so I would never treat anyone else family members any less.

My availability is valid through 1/4/21