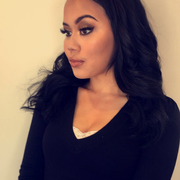 Shandrell was the BEST part of our vacation! She was AMAZING!

We went out of town for a week and so needed to ...

- Dena B.
Read all reviews

Check-ins and visits $15 per visit

I absolutely love animals! I think they should be treated fairly and a lot like humans. Talking/communication with them is very important. I make sure they have fun while also learning tricks and obedience. Animals love my spirit and they grow found of me rather quickly. I have no pets of my own anymore since I moved to Georgia so I would love to take care, teach, and love yours!

My availability calendar is valid through 8/20/2019

Shandrell was the BEST part of our vacation! She was AMAZING!

We went out of town for a week and so needed to get a pet sitter. This was the first time we had been gone for more than 3-4 days since we got our three cats, and so it was the first time we went looking for a pet sitter. After the first person we were talking to let us know three days before we left that she would be unable to sit for us, we were in a bind to try and find a replacement. I sent several messages to several people that seemed like they might be available, and Shandrell answered VERY quickly. Not only that, her response showed that she had read my message and was actually responding to ME, not just in a canned sort of way. She also gave me her cell phone number so that I could get in touch with her quickly.

We asked her to come by the house on the Friday before we left for vacation so that we could introduce her to the cats and walk her through the routine and the house. She was on time and communicated with us SO very well to plan for her coming by, which was a huge help and a relief, as that morning was beyond hectic. She offered her ID so that we could verify that she was who she said she was and recommended that we always do that whenever hiring a new sitter or service professional, which we hadn't even thought of. :) She was easy to talk to and listened carefully to everything that we had to say. She asked some great questions, several of which prompted us to better prepare for being gone for a week. She even broached the topic of using Venmo for payment, so that we could pay her daily based on how many times she was able to come and on how long she stayed. (I'm not even sure what we were planning to do to pay her, but this was the PERFECT solution!) Feeling very confident, we gave her a key so that she could come in twice a day to feed and play with the cats.

The very next day, we left everything out for her, as we had talked about, and headed out on our trip. We had just gotten to our destination when I started getting text messages from Shandrell letting us know that she was at the house and getting ready to enter to take care of the cats. She sent another text message once she got inside and checked on everyone to let us know how things were going. She even took a couple of pictures to show us what the kitties were up to! She fed the cats, made sure they had water, played with them for a while, and then let us know when she was heading out. It was wonderful to know the kitties were good, she could ask questions (especially because of our one hidey cat), and we knew when she was there so we could let neighbors and friends know, in case they asked. :)

One of the self-cleaning litterboxes that we have has a tendency to get clumped when one of our kitties has an upset tummy. Even though we had told her that she didn't need to worry about cleaning it out, she did anyway! She cleaned up the few kitty messes that occurred, and left the house just as clean as it was when we left, if not more so! :)

Our scaredy cat, Sinjin, who is a tripod kitty, hadn't shown himself after 4 days, so she stayed an extra hour (after asking if it was ok) and followed our suggestions to see if he would show himself so she could just be sure that he was still alive and mostly ok. :D Sure enough, after settling in for a little while and putting bird videos on the TV, Sinjin snuck down to the food bowls and started eating, so she was able to confirm that he was ok, just hiding! This was a HUGE relief, because even though I was sure he was fine, kitty parents can start coming up with all sorts of scenarios, so we were EXTREMELY grateful that she was willing to put in the extra time and effort to make him comfortable enough to come out and eat. That was SO huge and so very, very appreciated.

When we got home, the house was clean, our cats were chill, VERY happy to see us (of course), but also not terribly stressed as they often are after even a night or two of us being gone over a weekend. It was SUCH a relief to come home and find no huge messes, no terrible accidents, or indications of perturbed kitties! It was especially good because both my husband and I came down with the flu while we were gone, and finding the house in great shape was one less thing to worry about and to have to deal with after a LONG trip home. The vacation itself ended up just being sick at the beach for a good portion of the time, but at least we didn't have to worry about the cats! Shandrell's rates were also really reasonable, and completely worth it!

In summary, we HIGHLY recommend Shandrell to pet sit, especially for cats. She was conscientious, affordable, easy to work with, flexible, VERY open to communications, she took pictures of our cats, and she took wonderful care of them, too. We plan to have her cat sit for us any time we are going to be out of the house for even a night, as she was great with the cats and they were so much less stressed when we got back!

We are also willing to give references for Shandrell.

Thanks so much, Shandrell! You were a lifesaver, and made at least one part of our vacation flawless!

Dena and Matt B.
Shiloh, Diesel, and Sinjin

Check-ins and visits $15 per visit